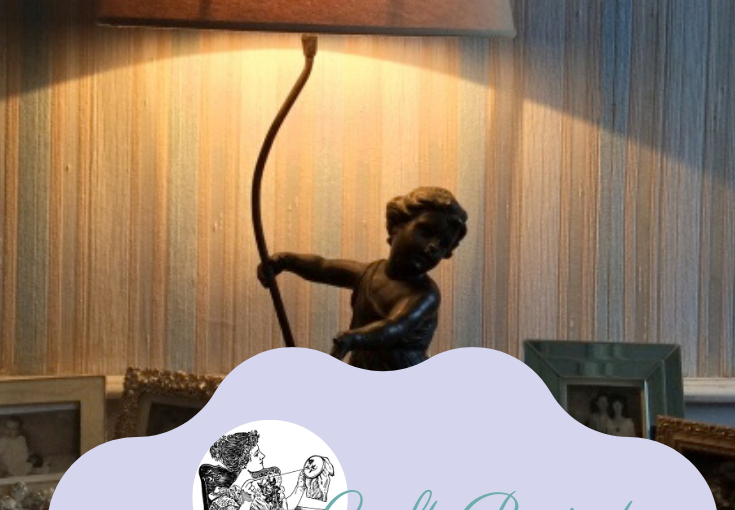 This is an old post from my previous site that I thought I’d share again in light of this.  I new it was brass, just by the sheer weight of it; so despite the too small, tobacco stained lampshade (kind of wishing I’d saved that for an upcycle, but we got rid of it when we moved from our temporary gîte) and the bizarre, carpet base it had was o be mine (cue evil laugh – bwah, hah, hah).

The first thing I did was buy a lampshade to replace the one it had. This cost 12€ from Centrakor and was a great size and shape for it, if a little plain. However I’d bought it without the lamp and when I got it home the fitting was way to big for the lamp’s bulb fitting. This often happens with older lamps, but I managed to find these lampshade reducers from Amazon to fix the problem.

As soon as I’d got it home I took a peek beneath the carpet and could see some plywood  being used for the base. It seems someone has broken the original base and knocked this together to salvage the lamp itself. As most of these lamps rest on a marble base I wondered if imitating something like this would be a good alternative. As I can’t afford a real marble base this means a paint job. I finally got round to doing something with it in today’s nap time.

I started off with the base and ripped off the carpet. Because I wanted an uneven surface to give it a stone like quality I didn’t bother removing all the carpet remnants and didn’t sand it either. I didn’t want to spray paint this one as although it’s my favourite nap time method due to the speed of it, it would be easy to get it on the brass which would be hard to remove. With chalk paint if that happens I don’t even need to use sandpaper. I’ve done something similar before and, because Iwanted to make sure the surface wasn’t damaged, I just lightly scraped it with my thumb nail on a slight patch. It didn’t damage anything, except for me nail that is.

The main reason I went for chalk paint though is because of its ability to thicken, allowing you to give depth and texture to the paint. Perfect for this project. I added two to three coats and left enough time between each to allow the surface to almost dry before adding another coat. I want to build up lots of dense, uneven layers.

In fact if you look at the first picture you’ll see that the person who added the wood didn’t sand or finish it, so there are lots of gaps. When I was painting I just took advantage of the thickness of the paint and filled these in.

To get the same effect you need to dab at the surface, leaving brush marks. The longer you leave the chalk paint the denser it becomes, so leave the lid off between each coat. You can see the pictures of these stages here…

See how the texture has got progressively more dense? Of course the carpet remnants help too.

After this I wanted to give it an aged look to blend it with the Brinze itself and so I used a round headed brush to roughly dab on some Annie Sloan dark wax to seal and emphasise all this rough work. In some areas I used a little, others a lot…

You see how it gives that lovely aged, marble like effect?

I decided to use leftover trim I had from the curtain project. The silk flowers are some that had been attached to a dress I wore to a wedding. If I’ve decided not to wear a piece of clothing again I like to see what I can use it for or what I can salvage from it.

Whenever I’m thinking about adding trim to something I photograph different design ideas and then create a pic collage to get a good comparison to see what I like. Here’s the variety of trim I tried.

I felt the top and/or bottom designs reminded me of Easter Bonnets crossed wth St Patricks Day hats, so they were out. When I’d decided on my design, because I was laying the ribbon in the centre and therefore couldn’t use the edges as a guide, I had to mark a line. I just used chalk and a measuring tape. The ribbon is 5cm in width and the width of the shade was 29cm, so I measured 12cm and marked a line and placed the ribbon edge on that.

When I tried out the ribbon it seemed easier to make it fit one way that the other, it laid flatter. Maybe this is because velvet ribbon is weaved on the bias.

I know a lot of people use hot glue guns for this type of project, but I used one once and it seemed to come though and spoil the material and I’ve been put off from them ever since. What I used to stick the ribbon to the shade was heavy duty spray glue. I started by cutting the length of ribbon I wanted then, starting with the middle, sprayed about a 10cm length with glue spray before lining it up with the chalk marks. I repeated that process around the lamp.

With the kind of tapering shape at some stage you find that you can’t continue to line the ribbon with the chalk marks without it puckering up. As I reached the side of th example, Where I felt it would be less noticeable, I snipped half way down the ribbon so I could lay one half on top of the other. At first this looked a bit messy, but when the second, thinner ribbon was added I don’t you don’t notice it. However, with hindsight I probably should have measured and placed that as it’s  a bit wonky, ha! 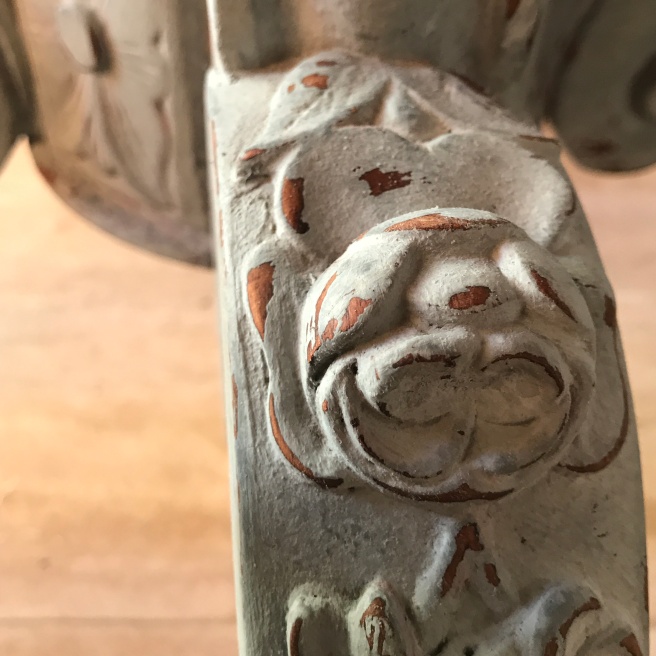 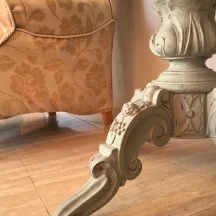 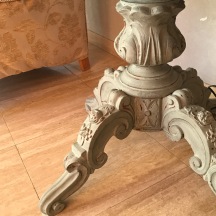 When I attached the silk flowers, as they’d originally been a broach, I did so with the safety pin. If I thought of this when I was adding the broader ribbon I would have just placed that bit of excess material at the front and attached them there as it was kind of tricky to do on material that’s fit tightly against the drum.

Heres the finished lamp with the light on and off. What do you think?