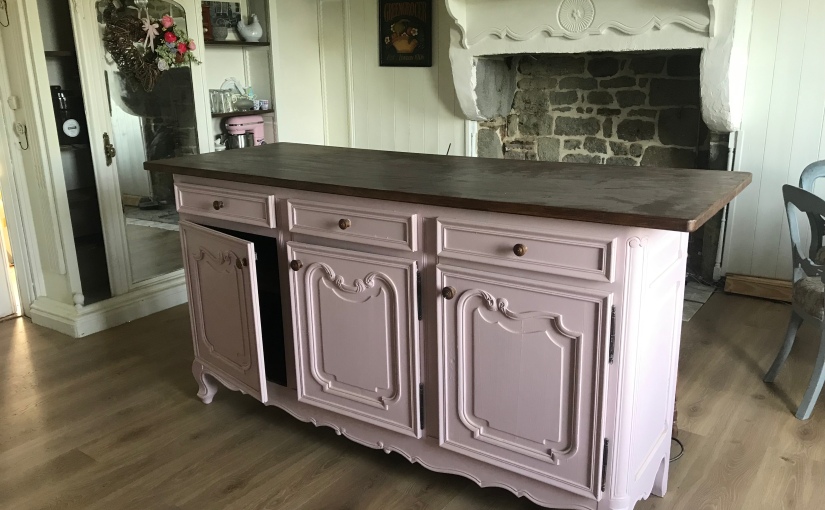 We’re so happy the floor is finally laid, but I thought that as there are so many tutorials on YouTube I would do a post on the difficulties and pitfalls you might experience. Why? Because throughout the laying process I kept grumbling “they didn’t tell you about this in those videos”.

One of the main reasons for my griping was that they all miss out it hurts. Some mention that your knees will hurt, that’s true, but I don’t just mean your knees. I mean everywhere. Your back, your legs, your bum. The lot. I started laying the floor on the Friday and winced any time I sat down all of the weekend. To put this further into perspective, I’d only finished 1/4 of the floor by then.

In all the videos they had a bare room, but we just weren’t able to do that. The kitchen island couldn’t be moved safely into another room and the damp autumnal weather meant I couldn’t store them outside whilst I worked.

As a result the fact that our heavy kitchen island was in the room dominated the whole project.

Added to that was the uneven walls of the room. There’s not a single straight line, because our house is built following the curve of a route. So the interior walls are all angled, or they have doors or built in cupboards. This all impacted on how we could proceed.

I had thought originally that I would lay the floor across the middle of the room from door to door. However the walls meant a safer course of action was to start running the lengths across the room in the other direction, however this meant the monstrosity of the kitchen island.

One more difficulty to overcome was that I’d moved all the laminate into the kitchen area to become acclimatised. It had been in the room adjacent, but needed to go in there and have all the boxes opened to let the air circulate. So, one more obstacle. Or, more precisely, lots more obstacles.

Because we didn’t have a straight run my dad, who was helping me, and I decided to go against all the recommendations and started to lay them in a staggered pattern. You can see how I left them on the first day…

We’d managed to fit one length under the island to the edge of the tiles I’d laid but the legs of the island meant we couldn’t fit any adjacent to that and moving the island at that point wasn’t an option due to the opened packets of laminate.

So we continued into the corner as much as possible, then as we laid more I had some space to move the laminates onto, creating more space.

At the end of the first day, apart from aching, I was worried we’d created a mess that we couldn’t rectify. If we kept laying boards the necessity to stagger them would mean a need to somehow slip boards in between what amounted to fork like prongs. Tricky.

Then I went in the next day and realised that I’d created sufficient space to start to swing one foot of the island onto the already laid floor and this created space to start lay boards in the space. It was a game changer.

After the weekend I started again; focusing on the corner that will house the dishwasher and sink. I’d tiled this area, thinking there might be future water leakages, and it therefore created an awkward area to work.

With the island moved I could fit in there to do the work and just concentrated on cutting to size here and then along the irregular wall and into the doorway.

Here we are at the end of the second day….

For the next two days I worked hard in there and eventually managed to finish most of the room. I was then left with those built in cupboards and needed to use a jigsaw to cut out the curved shapes. I didn’t have one. All ours were broken, but I couldn’t continue using the multitool I had been as I needed something easier to handle.

In the end my husband ordered me a Bosch cordless jigsaw. I cannot emphasis what a difference this made. I managed to fir the laminates pretty close to the cupboards (although they couldn’t be too close as there needs to be some give).

I have to do the skirting boards and trim yet, but that’s a job for next week. So too are the two last boards at each doorway. I have temporary boards in there at the moment, but I need to remove the upvc door to do the one leading outside and the other will be replaced.

I’m intending to continue the laminate into the room next door which will eventually be the dining room, but there’s a wall to be removed first and that’s just too much before Christmas. So I’ll relay that final board, which needed to be cut in half to meet the existing floor, and continue straight from there.

I’ve been trying different furniture in there; the larger table I’d intended to have will never work, so I moved this round one in there. The chairs are going to be changed and I’ll update you on that soon.