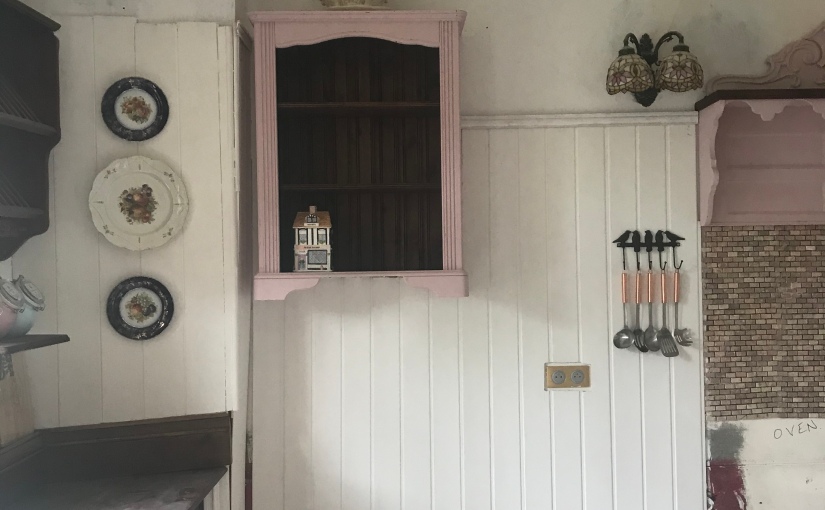 Those of you who follow the blog know – and if you don’t, we’d love to have you with us – that I’m putting together our kitchen with salvaged and upcycled furniture and wood. Money primarily is the motivator, but also I enjoy the challenge. Sometimes, when it’s frustrating, I don’t; but most of the time it makes life more interesting. This is one post that wasn’t a challenge whilst the work was ongoing, but as it neared completion I realised changes had to be made…..😩🤪.

FYI the reason for this post is how I got the bookcase to stay on the wall, not so much about the painting, staining, varnishing side of things.

Taking a bookcase and turning it into some open, wall shelving.

Why? Well that’s a good question. The bookcase in question is of good quality wood so should be valued. This is something I left off my list of whys before; salvaging and upcycling has meant that I’m constantly using solid, well made, wooden objects in my projects instead of flimsy, plywood, MDF or veneer.

This particular book case was bought when I had an old, Victorian, small terrace house and there were narrow alcoves either side of the fireplace. I had the bookcase made as I couldn’t find anything to fit the gap. It was lovely. Yet in our new home it seems to be a little lost.

The first step was staining the interior of the bookcase so that it matched the rest of the wood tones in the room. Then I added a coat of varnish to give it some protection in the kitchen environment.

Next came some coats of the pink paint I’d used on the central kitchen island; for those of you who are having a look back at that on this link – can you believe how different the room looks now?!!!

When I’d done the kitchen island I’d tried to make my own chalk paint. I prefer this because it scrapes of like, well, chalk and doesn’t flake like latex paints. I’d made some plaster of Paris mixture up to add to the latex paint I’d bought. The first time it had worked well, but the next day I found a lump of cement mixture stuck to the bottom of the huge 5L paint tub. I was so gutted, as I’d planned on using it elsewhere. Since then I’d read a tip that, when doing your own, make up small jars of paint at a time to use in one go to cut down on waste.

I coated the piece in four to five layers of paint as I really wanted to be sure that the piece was well covered. On these layers I painted right side up, but when I was happy with the coverage I laid it on its back on a stand and started on the bottom. This was important because you’d see that when it was hung on the wall.

As I was doing this I was gradually adding T&G to the walls. The corner area was particularly tricky, and in this kind of scenario I like to add a piece and then think what to do next. This worked out really well as I realised that I could use it to disguise fixings and add a little more support.

You can see by my scribbling on the wall where I’d worked out where the cupboard should be based on the tap placement. In fact I scribbled all along this wall to try and give me an idea of where the oven would go, what size of furniture I’d need between the sink and oven etc. It just gives me an idea of what I need to be looking out for next.

As I worked on painting the cupboard I made a sort of shelf of L brackets, so I could rest it on them. On the wall you can see an oblong shape with sections either end. This was marking the base section, which a section missing at the back, and sides of the casing. The T&G would need to go round these side sections and up to the higher line.

But I wasn’t going to solely rely on that. As with the chimney mantle I was going to use z bars on the top. I made a row of them along the back of the cupboard, screwing them in. To discern where they needed to be on the wall I took this off cut of wood and marked on it the two outside edges of the cupboard. Then I took the partner pieces to the exterior z bars and bluetacked them in situ. I placed the wood, aligning the marks I’d done for the outside and then marked where each z bar was.

The reason I did it this way was because their counterparts would need to be in alignment and consequently further beneath the cupboard top.

The final mark I made was indicating the length from the base of the back of the cupboard and the bottom of the companion z bar.

Notice how in the L fixing shelf the part jutting out was at the bottom. This was because the z bars inevitably mean the cupboard would be a little proud of the wall and having the length against the wall situated behind the cupboard would slightly counteract that.

I marked where the width of the cupboard was before resting the off cut of wood on each L bracket and marked off where the bars should be, drawing a line between the marking horizontally along the wall when I was done. Then along this line I drew the markings where each z bar needed to be…

After that I screwed them into the wall. Drilling into these ancient walls can be tricky, and I’m not successful with every one. Even when I start with narrower drill bits to successively wider ones sometimes it just doesn’t work. So I identify which ones can hold the wider screws and use the appropriate size ones for the holes of the remainder. Prior to screwing in I added my builders glue to the back of each bar to add extra support; then I left it over night to dry.

Whilst I was cleaning up I noticed my mistake. I had forgotten to mirror image the plan of the z bars. So I knew tomorrow would mean my slightly altering the bookcase positioning. C’est la vie.

If there is going to be something fixed to a wall I always try and do a couple of coats of chalk paint first on the tongue and groove. That way when you need to paint around the furniture you have a bit of breathing room. Once the wall was painted it was time to see if the fixtures would keep the cupboard in place.

I was nervous when I heaved the now cupboard in place. Would it work? Would it hold its weight? Would it look……odd?

Well, it held its position. Here’s the initial photo….

I was waiting for wood brackets to arrive to fit to the base of the cupboard to make it look less bookcases, so I went ahead and finished the back wall including the oven mantle shelf.

That had been another dépôt vente buy; the detailed cornice had been bought separately another time. I was pleased with it, and my tiling, when it struck me. The large gap between the light and the cupboard.

Added to that I wanted another cupboard to run on the side wall so we could store the oven’s gas bottle and have a side worktop.

When I saw this in the dépôt vente I realised I could solve two problems at once….

The top would go in the bookcases place and the bottom could go beside the oven with the bookcase restituâtes above it.

For those of you living in France….

In my post on the mantle for the fireplace I used these, but I ordered them from Amazon. I’d actually gone into Bricomarche and shown a picture of them to the staff there, but they didn’t know what I was talking about. Whilst looking for something else I happened to fall upon these. The Amazon ones cost 7€ a pair, whereas these cost 7€ a pack of 4!!! Although they’re slightly smaller than the Amazon ones I’ve still saved myself a lot of money!

Bricomarche is the most expensive Brico, but followers of my Twitter account know my thoughts on that, so my mind turned to wondering how much they were in other places. I couldn’t find them in Brico Cash, the least expensive, but in Le Clerc Brico a pack containing a pair of z bars was 2.60€.

One thought on “Bookcase to Wallcupboard (or one step forward….)”