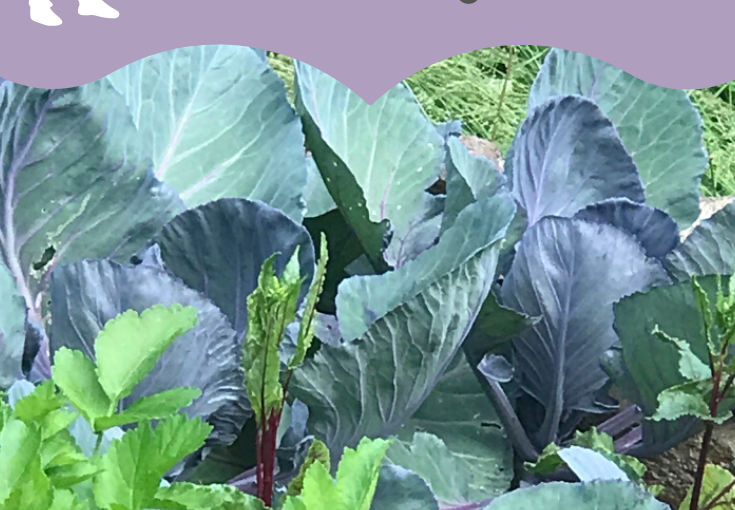 After my last, sad post I thought I’d update you on some more cheerful potagère news. The weather has turned very warm here so, rather than contain them for the extra week advised by their seller, I’ve let the ducks go out into the poultry enclosure.

They of course had their friend the gosling to keep them company. The trio are forever together and sometimes it looks like the little goose is their surrogate mum. After the loss of the other gosling this makes me so happy to see the little chap have companionship.

Their first night outside I had shown them the old, plastic dog kennel that I’d filled with grass cuttings. It was like a soft warm bed that I kept catching them up and placing them in. Of course the others would be running around and at first this made whichever member of the foul family I had in there waddle out asap. Eventually I managed to get them all in and they seemed to like it.

The produce in the potagère is growing well. My surplus of lettuce is being shredded and fed to the poultry and I’m going to pot some up and take some to the neighbours tomorrow. The beds are kind of crowded you see and reading my month by month veg grower book I’ve started,to think about planting others things that will come to fruition later in the year.

This week we had our first meal with our own grown veggies; lettuce and peas. I waited until my daughters came home to pick them as I thought they’d be excited to do so. I was right. They chatted away as we selected leaves from still growing lettuce, leaving their stems to continue on their merry way. My youngest, seeing me shred leaves that had been nibbled by insects and throw them in with the chickens thought that was the point and was happily grabbing handfuls to give them, eek!

So we moved on to the peas, squeezing the pods to see if they were firm and plucking some that were from the stems. We had them in a salad and I’ve never seen my eldest eat so much green.

I’m still trying to figure out how and when to harvest them; do I just keep them on the vine until ready to eat, or collect and store them? I do know that to store them I have to leave their little ‘hats’ on.

I’ve already spoken of how carrots can be left in the ground even after a frost, but I thought I’d show you how they are popping up from the ground. Yesterday I could only see one group, but I swear that after today’s intense heat lots more seemed to have shown themselves.

The beets have at least one plant that are the size of a golf or tennis ball and others are growing well.

The spring onions have grown so well that I’ll definitely have to harvest some tomorrow. The bulbs on some of them are just lying outside of the earth on the ground.

The red cabbages aren’t ready, but I’m finding how they grow fascinating. You can gradually see the shape form, with the central leaves closing in on themselves and the outer ones spread out.

As I can make space in the beds I’m thinking of broccoli, leeks, more parsnips maybe and carrots too if I can get them (they can stay in the ground so long so can be used in the autumn and winter), as well as Brussel sprouts -maybe even some pumpkins?

The markets here don’t just sell good food, you can buy veggies and some fruit ready to put in the ground to continue growing. I’m going to go with the girls and choose some more things to go in.

To hear the birds sing as you tend to, select and eat your own grown food. Yes, this is life pre fall in Eden. I don’t know why I’ve been blessed with this, but I’m so grateful. To think this was God’s plan for all of us. It still is when His Kingdom comes.